My basement office has a few sound isolation features to reduce the disturbance of the small children running around upstairs. It gets hot without ventilation, so I would keep the door open, which totally defeated the purpose of sound isolation. I do have some windows to the outside but there’s an inside and outside window and it is pretty hard to get to both, so it’s kind of a frustrating thing to manage throughout the day. So I added a custom ventilation system.

I read some material that recommended having specific measurements for the intake/exhaust versus the space in between. I mostly picked sizes based on what I stumbled across for product.

The office has 10″ x 6″ inch speediboots that go to 7″ round. I couldn’t understand how people usually went from a grill/vent/diffuser to duct. I guess they usually make their own HVAC boots. Which seems insane.

Half of the speediboot transition hangs out into the basement, so I added a 2×4 wall with a layer of 1/2″ sheetrock filled with fiberglass insulation, which ended with the speediboots pretty much flush.

The baffle box is made out of 1/2″ plywood and 1×1 for the inside corners. I should have bought a higher grade of plywood so it would be straighter, as the warping made it hard to be sure that all edges were tight. The box is two halves, top and bottom, with a divider in each to make the internal space U shaped. One half of each U goes into the office, the other half goes to the basement. The baffle box is filled with fiberglass insulation instead of a fancier acoustic foam to reduce echo because I have a lot of it. There is fiberglass screen loosely stapled over the fiberglass insulation to avoid any getting sucked off the sides.  The basement side vents are 12″ x 12″ with air filters, which mostly just seemed like a good idea if I had to put in a vent anyway. My basement isn’t really musty or anything.

Inside the top half is a 6″ 120VAC fan. Another piece of plywood cut with a 6″ hole makes all the air go through the fan. In the office is a 24VAC thermostat and a 120VAC fan speed control. An 120VC – 24VAC transformer provides power to the thermostat which closes a relay with a 24VAC coil that switches 120VAC to the fan speed control and then to the fan.

The basement stays about 70 degrees on summer days, so the office thermostat is set to about 75. The fan speed switch is mostly because I wasn’t sure how loud/quiet the setup would be when the fan is on full blast. It has been fine. After a day of use, it has kept the office below 80, which has been pretty right. The basement humidity stays around 50%, which makes the seemingly high temperature fine. The basement has an air to water heatpump which efficiently dehumidifies too. The thermostat on my desk shows 77f with a high/low of 79/73.

The fan noise doesn’t bother me, but I’m kind of OCD about it running a lot, so I probably should have gotten a digital thermostat to find the best set temperature. Eh. It’s been nicer in here on hot summer days. If it needs to be any cooler I’ll probably just stick an air conditioning unit in the basement set to 65 or so. 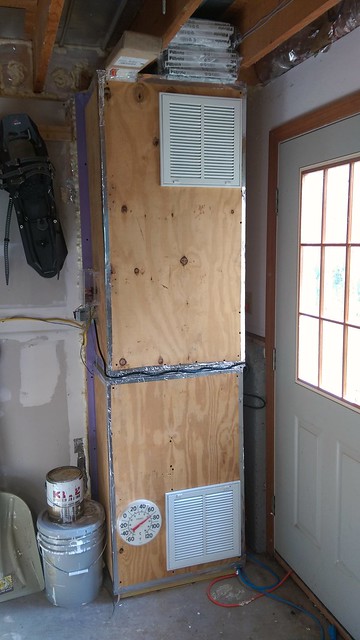